Whatever your dream or goal, Pacific Jules will help you achieve it!
Our dedicated and passionate coaches: Julie, Sarah Anne, Warren and Linda are 100% committed to helping you achieve your goals. 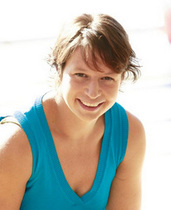 Julie, founder of Pacific Jules, has years of experience in both pool and open water swimming as well as Surf Life Saving.
Julie received an Australia Day Award as Manly's 2012 Sportsperson of the year and was previously the Club Captain of Manly Life Saving Club and holds all SLSA awards from Bronze Medallion, right through to and including Gold Medallion.
Julie also trained and assessed Manly LSC's members in all life saving awards. Julie is an SLSA level 1 coach and Austswim certified and knows what it takes to feel comfortable in the open water right through to completing long distance ocean swims as her personal swimming achievements include:
•    Multiple medal winner in World Masters Swimming Championships in New Zealand in 2000
•    Winner of the Ocean Swims Distance Tally in Australia for the 2006-2007 season
•    2005 and 2006 female winner of the 11km swim from Bondi to Watson's Bay
•    Completing 19 solo the 20km Rottnest Channel Crossing Swim in 2006, 2007, twice in 2008, 2009, 2010, a double in
2015, twice in 2016, six times in 2017, twice in 2019 and once in 2020
•   12th person to ever complete a solo double Rottnest Channel crossing, that's there and back, 40km in March 2015
•   150th person to accomplish the Triple Crown of Open Water Marathon Swimming:
- English Channel - 33km solo in June 2016
- Catalina Channel, LA - 33km solo in July 2017
- Circumnavigated Manhattan Island - 46km solo in July 2017
•   Successful Cook Strait, North to South Island NZ - 26km solo in Feb 2018
Completing 3 of the Seven Oceans to date 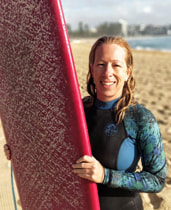 Linda has been swimming from a very young age and swam competitively at club level right through to her teenage years. Being a lifesaver, keen surfer and ocean swimmer she spends most of her time in or around the water. She is extremely at home in the water and is a natural teacher and communicator.
​
Her calm manner and clear instruction allow her students to quickly feel at ease in the water and focus on learning whilst having fun.

In addition to being a qualified AustSwim Teacher of Swimming, Water Safety and Competitive Strokes she is also qualified level 1 Surf Coach and an active bronze medallion lifesaver at her local surf club. 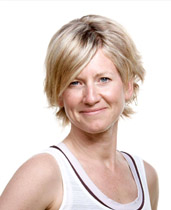 Sarah Anne is an accomplished triathlete and duathlete, racing at age group level for Great Britain, and competing at distances up to and including Ironman. Her passion for swimming comes across in her swim coaching. Sarah Anne teaches a whole body method of freestyle swimming. This effortless stroke technique opened up the world of swimming for her and she enjoys passing on this revelation to others.

Sarah Anne is a qualified Master Personal Trainer, graduating as Institute Champion, and a Total Immersion Swim Coach. Sarah Anne is a Level 1 CHEK Holistic Lifestyle Coach and continues her studies with the CHEK Institute. She is also an accredited Level 1 Triathlon Australia Coach and also holds her Bronze medallion in surf lifesaving.  So you can rest assured you're in safe hands. 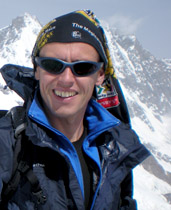 Warren’s sports experience and achievements make him one of the most motivating coaches you'll ever find. He has swam, run and biked his way around Ironman distance triathlons around the globe, run crazy distances in ultra races such as the North Face 100 (yep that's 100kms!), cycled across most of the southern cape of South Africa in the Cape Epic 8-day mountain bike event, and if you added up the mileage he covers in one year on foot or two wheels it would make you dizzy!

Warren is an accredited Level 1 Triathlon Australia Coach and a qualified Total Immersion swim teacher and holds his Bronze medallion in surf life saving, which means he's as happy in the water as on land and his aim is to make you feel the same way.